London youths smell what The Rock is cooking 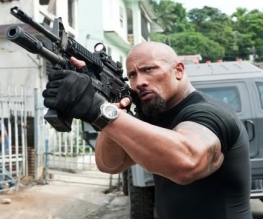 As if we didn’t already know that famous people were better than us in almost every way – they’re prettier, richer and can almost all sing – it seems that the planet’s celebrities are now saving the day, too.

Not to be outdone by Kate Winslet’s daring rescue of the entire Branson family from a burning building (how those Chinese whisper…), or Dick Van Dyke’s dealings with dolphins, Dwayne “The Rock” Johnson has taken to a bit of real-life crime-fighting whilst on location for Fast and the Furious 6 in London.

Despite being an Atlantic Ocean and a suspension of disbelief outside of his jurisdiction, the fictional fed managed to chase a couple of chavs from a van containing expensive equipment while in character as Hobbs; his flak jacket, FBI badge and 6ft 5in frame to the rescue, presumably while Vin Diesel just stood and watched.

Fingers crossed the incident makes the DVD as a special feature. Or better yet, the movie itself.