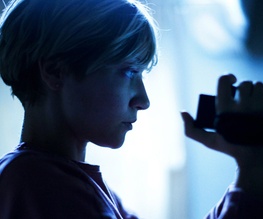 Lurid green nightvision. Shaky camera work. More than a little bit of haunted house action… it can only be the Lovely Molly trailer!

The Blair Witch Project was the first of its kind; the ultimate gimmick film, it played on the idea of the “true story” element through the sole use of a handheld camera. There’s nothing like a shaking lens to make you feel pretty damn terrified, huh?

And now the film’s co-director, Eduardo Sanchez, is hoping to recreate his insane Blair Witch Project success with… well, with something very similar.

Okay, to be fair to him, he’s mixing POV camera with the usual third-person approach. But can this haunted house / possible possession story offer anything different to the numerous Paranormal Activities that have pervaded our cinema screens for what feels like forever?

“A new vision of evil that will redefine horror once again…”

Well, maybe. Maybe. The early reviews coming in from our friends across the Atlantic Ocean suggest that, in fact, this multi-layered horror film is going to terrify the hell outta us. And they’ve also suggested that what we’ve seen in the (frankly) disappointing trailer is something of a red herring. Maybe not everything about this haunted house is quite as obvious as it would first appear. Especially when you consider the added element of Molly (Gretchen Lodge) and her frequent substance abuse…

We guess it’s just a case of waiting and seeing what happens. There’s no UK release date yet, but we know it’ll be hitting US cinemas in May. We guess, depending on how well it’s recevied there, it’ll be delivered to the UK sometime around late June.

Just an average POV horror or something much more terrifying? Tell us all the thoughts from inside your brain right this very second…

Previous: First shots from Django Unchained
Next: The Pirates! In An Adventure With Scientists