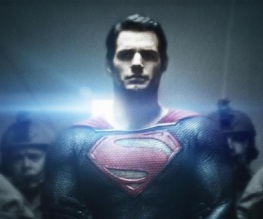 Man of Steel‘s Superman is looking decidedly super-serious in this new trailer, all mixed-up about his life-changing powers and unsure of how to make his way in the world after discovering he’s not like other people. SAVE EVERYONE, CLARK. SAVE EVERYONE AND HAVE LOADS OF FUN IN THE PROCESS. We hope he hears us before that super-frown becomes permanent.

He’s a tricky superhero to get right, and with Russell Crowe and Kevin Costner as parents, no wonder these esteem issues keep popping up. While Henry Cavill is busy wrapping his thoughts around the fact that he can do ANYTHING HE WANTS, we get a glimpse of Michael Shannon looking maniacal as General Zod, Amy Adams‘ Lois Lane sharing an intimate moment with Supes that looks to either spell matrimony or EPIC SACRIFICE (we’re guessing the latter), and some dodgy CGI flames engulfing the Man of Steel‘s considerable frame. We’d hoped there would be a scene with him on fire.

It’ll be interesting to see how action-pornographer Zack Snyder handles the emotional core of Man of Steel, and it’s certainly gratifying that it seemingly hasn’t been altogether chucked, given the amount of inner turmoil on display in the trailer. We hope there’s a modicum of fun to proceedings but truthfully, any direction is a gift after Bryan Singer‘s Super-bland flopped around for that brief summer in 2006. It doesn’t get much more serious than the combination of Snyder and Christopher Nolan (as producer), having delivered the sternest superhero films of all time between them. That they were also pretty damn great is surely reason enough to get excited about Man of Steel.

Will Man of Steel fly away with 2013 in a year bursting with superheroes? How do you think the new trailer stacks up? Comments below.