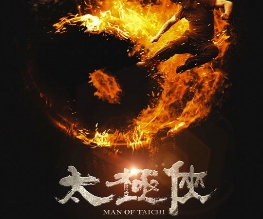 Keanu Reeves has faced off against some pretty solid evil : Dennis Hopper as Howard Payne in Speed; Al Pacino as Satan himself (ironically named John Milton) in The Devil’s Advocate; and Hugo Weaving as Agent Smith in The Matrix. You’d think he would have picked up a few pointers along the way, preparation for when it was finally his turn. But as the teaser trailer for Man of Tai Chi demonstrates this is all just wishful thinking.

Watch him take melodrama to all kinds of new heights below:

Until last week when the first poster and a few stills were released, no one knew much about Man Of Tai Chi, let alone what to expect. Despite the ridiculous voice over, the actual action looks pretty good. The plot seems to follow a Mortal Kombat/Tekken line, pitting various styles of fighting against others. Tiger Hu Chen, who worked with Reeves previously on The Matrix franchise as a stuntman, represents the battle art of Tai Chi. Currently our knowledge of it is as a form of gentle meditation, but Man of Tai Chi seeks to break that fallacy. The fights scenes already seem pretty furious and plenty varied, with even Reeves looking like he’ll get in on the action come the end.

Co-starring The Raid‘s Iko Uwais, Man of Tai Chi will be seen first in China during summer, before gaining a worldwide release for Fall.