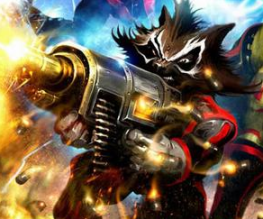 Things have been revving up nice and fast in the Marvel Studios recently. Superhero fans everywhere have been getting hot under their capes for the soon-to-be-released sequels to Thor, Captain America, Iron Man and the launch of new Marvel heroes in Guardians of the Galaxy. But now it seems the Marvel studios have got stuck in between second and third gear. Like, really really stuck. Both dwindling comedian Adam Sandler and new Kick-Ass 2 star Jim Carrey are currently being considered for possible roles in James Gunn‘s Guardians of the Galaxy. While it’s true that the bosses over at Marvel have been mulling over several names for their space-alien-human heroes for some time, the prospect of an Adam Sandler superhero is a terrible, terrible thought.

Jim Carrey has clearly found a new calling for superhero parts. The new still image from Kick-Ass 2 seems to show him settling into his role with ease, bringing back those facially-expressive jokes we so dearly miss (do we?). It is important to note, however, that Marvel is looking into the availability of Sandler and Carrey rather than the casting. Everything is all up in the air like a couple of juggling balls. Juggling balls that’ll hopefully land on Adam Sandler’s head like a pair of lead-filled coconuts.

But who would Sandler and Carrey play? – we hear you sob, with real actual tears. Latino Review proposes Groot (the talking tree) and Rocket Racoon (gun-wielding space mammal) for the two actors. That being said, it’s not clear whether both will star or just one. Frankly it’s a lose-lose situation for any actor who has to dress up in a racoon costume and pretend to be a superhero.

In other news, Wes Bentley, Chris Lowell, and Cam Gigandet are currently reading for the role of Star Lord, the main antagonist in Guardians of the Galaxy. John Krasinski and Jim Surgess have previously been linked to the Star Lord, both with no luck so far. With Guardians of the Galaxy due to be released in August 2014, Marvel best make a decision quick before we storm into their studios and offer ourselves up as a sacrificial gesture for all Marvel fans and Sandler h8ers. We’ll keep you posted!

Top 10 reasons Adam Sandler shouldn’t play a talking alien-tree or a space racoon or any part ever again. GO: