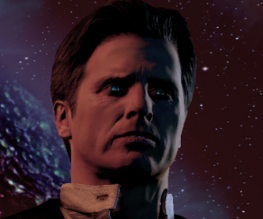 EA and Bioware‘s unbelievably epic game series Mass Effect has had rumors of a theatrical rendition of the alien-replete RPG for a while now, but after an initial announcement that Mark Protosevich (I Am Legend, Thor and currently involved with Jurassic Park 4 and the Oldboy remake) was writing a screenplay about Commander Shepard’s campaign against the Reapers, not a lot has been heard since.

The reins have now reportedly been handed over to Morgan Davis Foehl, a reported fan of the Mass Effect series, but since neither him nor anything he’s worked on appears on IMDb, we’re a little suspicious he even exists. There remains the possibility this is a Reaper plot to destroy the Charon Mass Effect relay (can I get a holla from the geeks in the audience!?)

To put things into perspective, the Mass Effect series has sold 3.5 million units world wide, and earned EA a neat $200 million. Mass Effect is a big name. Considering the other languishing game-movie chimeras currently on ice at the moment, a Mass Effect movie might just take advantage of a niche in the market. The Halo, Bioshock and Uncharted adaptations have all hit brick walls in their development (thank God), so we wouldn’t be surprised to see the same fate await Mass Effect. In the right hands, it might just be an excellent idea. Who wouldn’t want to see Martin Sheen reprise his role as the Illusive Man? Or maybe Carrie-Ann Moss would be up for dabbing on a little blue paint and acting out her alien character Aria T’Loak on the big screen?

Excited for a Mass Effect movie? Or will this go the way of every other film based on a game? (Goddamn you Uwe Boll)