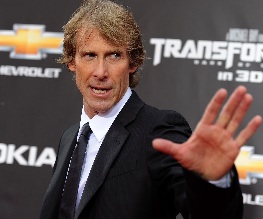 Michael Bay has apologised for 1998’s Armageddon in its entirety, adding that the studio “took the film away” before he was completely happy with it. This might go some way to explaining why nobody else was happy with the film when it came out either. Mike said: “I will apologise for Armageddon, because we had to do the whole movie in 16 weeks. It was a massive undertaking. That was not fair to the movie. I would redo the entire third act if I could. But the studio literally took the movie away from us. It was terrible.

“My visual effects supervisor had a nervous breakdown, so I had to be in charge of that. I called James Cameron and asked ‘What do you do when you’re doing all the effects yourself?’ But the movie did fine.” We might have to disagree with you there, Mr Bay – Armageddon was panned by critics and film fans alike.

Armageddon starred human Bassett hound Bruce Willis as an oil driller tasked with being shot onto the surface of an incoming meteor with his crew in order to save the human race. Ben Affleck, Liv Tyler, Steve Buscemi and Owen Wilson also starred.

What else do you think Michael Bay should apologise for? Let us know below