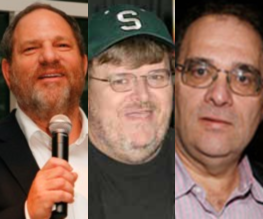 Anti-capitalist crusader Michael Moore has instigated legal proceedings against the formidable Hollywood duo of Bob and Harvey Weinstein because they allegedly still owe him big bucks accrued from the success of Moore’s 2004 crowd-pleasingingly Bush-bashing documentary Fahrenheit 9/11. The hirsute director filed a law suit in the Los Angeles Supreme Court yesterday accusing the Weinsteins of “Hollywood accounting tricks” and “financial deception” that has put Mr. Moore $2.7 million out of pocket.

The film is the highest grossing documentary of all time at $222 million worldwide, and is still the only doc ever to break $100 million at the US box office, so you’d have thought there was plenty of lolly to go around. But according to Moore the Weinsteins have been holding out on him, the fiends. His lawyer said in a statement: “It’s very sad it had to come to this. Michael believes the Weinsteins have been a force for good when it comes to championing independent film – but that does not give them the right to violate a contract and take money that isn’t theirs.” To which the Weinsteins’ lawyer replied, “He should be ashamed of himself,” probably with a sad little lawyerly shake of his head. Expect this one to drag on and on.

Previous: Cuckoo
Next: WIN: 3 x ALIEN VS NINJA on DVD!