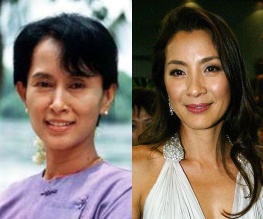 Best For Film is inordinately excited to bring you what we believe to be a world exclusive; BAFTA-nominated Malaysian actress Michelle Yeoh is to star in a forthcoming biopic of Burmese pro-democracy leader and Nobel laureate Aung San Suu Kyi.

No official information has been released on the film, but our mole tells us that it will focus on Aung San Suu Kyi’s personal experiences rather than be explicitly political.

That’s all we’ve got for now, but to be fair it’s more than anyone else. More on this exciting story as it develops…

EDIT: The biopic is apparently being made by the BBC. We call Benedict Cumberbatch to cameo as General Ne Win!

EDIT: We can reveal that film maker and novelist Rebecca Frayn is the creative power behind the screenplay for the film, which has the working title of The Divided Heart. Best For Film sleuth like you don’t even know.

EDIT: You may have noticed this story being trailed in the mainstream media in recent days, but we got here first! Incidentally, rumour has it that Luc Besson has been attached to direct – more on this as it becomes available.

EDIT: Michelle Yeoh has been deported from Burma after travelling to the country for a second meeting with Aung San Suu Kyi.

Previous: How to Train Your Dragon
Next: Brighton Rock trailer online