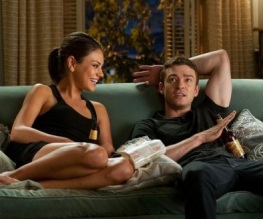 “It’s all going to start AGAIN!” Mila Kunis reportedly has told pals after seeing the sex-ridden new trailer for her upcoming film Friends With Benefits. Whilst making the movie with co-star Justin Timberlake, the rumors flew hot and heavy that the couple were having an affair — something both vehemently denied.

Now that J.T. has officially split from long-time love Jessica Biel, Mila Kunis apparently awaits a renewed storm of speculation that she and The Trousersnake were getting their respective rocks off both on and off-screen during filming.


Far be it from us to abate the edifying interest in such matters of who’s doing who, but perhaps Kunis should direct her concerns elsewhere; for example – the film looks like an even greater suck-worthy imitation of Black Swan co-star, Natalie Portman’s equally imaginatively entitled, latest rom-com insipidity, No Strings Attached.

If Kunis is attempting to perpetuate her doppelganger role in Black Swan, she’s doing a damn fine job of it.

Previous: Schwarzenegger to star in sequel to True Lies?
Next: WIN: CAGED on DVD x 5!