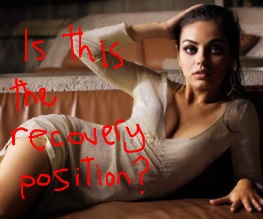 Mila Kunis, the actually quite talented actress who is repeatedly and unfairly judged on her good looks rather than her good acting, has found another way to distract people from her largely successful seventeen-year career – she stopped someone from dying.

The Friends With Benefits star apparently saved the life of a 50-year-old man who was working in her LA home when he collapsed with a violent seizure. Unfazed by his convulsions and the blood dripping from his mouth (she did have to spend a lot of time on the Black Swan set watching Natalie Portman have a lovely big wank, after all), Kunis put him into the recovery position and forced a wallet between his teeth to stop him swallowing his tongue. She even offered to ride in the ambulance.

This news comes just days after Oscar winner Dustin Hoffman saved a jogger who collapsed with a heart attack in Hyde Park. Before that came Ryan Gosling and his death-defying plunge to snatch whiny journalist Laurie Penny from the path of a New York taxi. And who could forget the legendary story of Kate ‘Hulk’ Winslet, who ran through a burning building holding Richard Branson’s mother above her head (or something)? Man, celebrities are so cool.

Which actor would you most like to save your life? You can’t have Jessica Chastain, we’ve bagsied her.

Previous: Kurt Russell drops out of Django Unchained
Next: CGI Paddington Bear to happen to us all