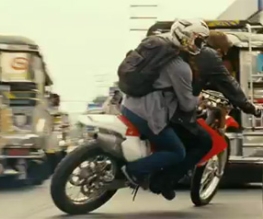 With the Rooftop Rescue clip out yesterday, now there’s yet more Jeremy Renner running, jumping, punching Bourne Legacy action. He’s jumped off the rooftop, Rachel Wiesz is still squealing, and now they’re on a motorbike somewhere ambiguously Asian. Alright, it’s the Philippines, where a major portion of the film was shot on location and where the film will premiere five days before it opens in North America.

In this clip, Renner and his hostage-cum-eventual love interest Marta (Weisz) are on the run from the both the local police and some sunglassed baddie with limited respect for the law. By the looks of things, the stunts in Tony Gilroy’s The Bourne Legacy are going to be pretty mind-blowing. You go Aaron Cross!