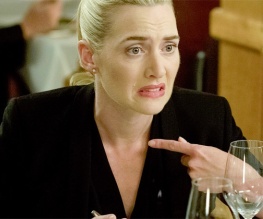 Movie 43, the film that has been branded the “worst film ever” by critics, has achieved a better screen average in box office sales than Oscar nominee Zero Dark Thirty. Although Zero Dark Thirty has achieved more profit overall, making £1,052,845 to Movie 43’s £787,648, it has been on average less successful in the cinemas that were screening both, with a difference of just £400.

So what does this news tell us about the viewing public? That popular taste has reached an all-time low? The film is an ensemble comedy, starring 43 actors including Hugh Jackman, Emma Stone, Kate Winslet (pictured) and Uma Thurman among others. Actors, who you could safely say were not struggling in their careers and are in no desperate financial situation to forgive taking minor roles in this film. On that point, it has been said that this is the “biggest waste of talent in cinema history” by Peter Howell of The Toronto Star. This is a bold statement when you consider recent ensemble comedy films such as Valentine’s Day and New Year’s Eve.

Movie 43 is a collection of short films directed by not inexperienced filmmakers Peter Farrelly, of There’s Something About Mary and Brett Ratner, of Rush Hour and X-Men: The Last Stand, among others. However, the comedy scenes range from a cartoon cat peeing on Elizabeth Banks to Halle Berry’s breasts being dunked in guacamole.

While gross-out comedies are not uncommon, the news that critical disaster Movie 43 is being rewarded in box office receipts, is particularly depressing for all at Best for Film. Especially during awards season, when films worthy of praise, such as Zero Dark Thirty, are being given praise en masse by the press. Wait for our Movie 43 review, it will be a treat.

Will you go and see Movie 43? What are your thoughts on ensemble comedy? Let us know.

Previous: Entourage film given the go-ahead by Warner Bros
Next: Reality