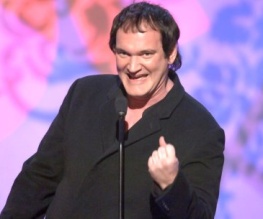 Director Quentin Tarantino has been accused of nepotism after handing out prizes to his nearest and dearest at this year’s Venice Film Festival.

Tarantino, who led the 2010 jury, presided over a number of award decisions which could owe more to personal allegiance than the merit of the films involved. Most notably, his ex Sofia Coppola won the coveted Best Picture gong for her film Somewhere despite getting mixed reviews from critics in attendance.

Other decisions were simply odd – Vincent Gallo, the infamous director who made Chloë Sevigny fellate him on camera in The Brown Bunny, won the Best Actor award for a role (in Essential Killing) for which he had no lines.

Tarantino, for so long the unrelenting bad boy of Hollywood, now risks making a mockery of a great cinematic institution. Stop it, Quentin. Just stop it.