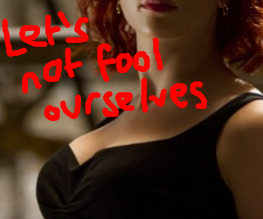 You know that phrase, “If you can’t say anything nice, don’t say anything at all?” We’ve helpfully updated it for the modern age. It now goes “If you can’t give us really f*cking interesting Avengers shots, just let us get on with talking about rubbish Mirror Mirror looks.” To cut a short story long, we’ve got some new pictures from Marvel Avengers Assemble, and once we’ve stopped bitching about them you’ll be allowed to take a look. Who wants to see a HULK SMASH when you’ve got the juicy lapels of Bruce Banner to feast your eyes on? Jeremy Renner midway through one of his infamous Jennifer Lawrence impressions Samuel L Nick bringing the Fury. Eyepatches are tricky to pull off aren’t they? Tricky. and, of course, the token breasts. Can’t be saving no world without them. Are we getting senseless caustic? Or do we deserve more than photos of Mark Ruffalo’s day wear? You tell us…