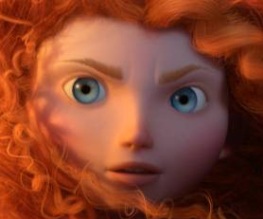 A torrent of typically gorgeous new images for Pixar’s Caledonian fairytale Brave have been released, and they ask as many questions as they answer.

Harking back to the film’s original title, The Bear and the Bow, the five new images are a mix of the sort of shiny look-at-Princess-Merida-being-all-Katniss-Everdeen stills we’ve seen a hundred times before and some much more interesting (and darker) moments.

To kick things off, here’s Merida (Kelly Macdonald) showing off her as-yet undemonstrated skill with a sword as she spars with her father King Fergus (Billy Connolly). Queen Elinor (Emma Thompson) is not amused…

Oh look, and here she is shooting things again. She so kooky:

Hang on, what’s this? All of a sudden things are looking a little scarier. And why is that bear all trussed up? Is the bear that’s out of shot downstage left throwing Merida towards the other bear? Other Bear (apart from looking like Ceiling Cat) seems more concerned than hungry…

Find out if we’re right (we clearly are) on 17th August.

Previous: Will Gary Ross take on Houdini biopic?
Next: Top 10 most ridiculous names in Hollywood