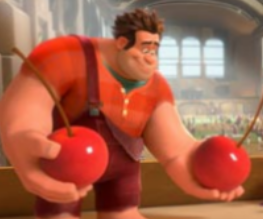 If you’re feeling a little glutted on the pretty-but-pretty-predictable Brave output, we have GOOD NEWS for you! We’ve got a first glimpse at the main characters of Disney’s upcoming computer game based hero/villain tale Wreck It Ralph, and they’ve made us all more impatient to get our hands on some actual footage. JANE LYNCH IS IN IT. GOD BLESS YOU JANE LYNCH.

So, Wreck It Ralph focusses on the characters in a 90s style arcade block, and in particular on a villain called Ralph. Thing is, Ralph is tired of always being the one to ruin the hero’s day, and is determined to break free of his game and go on his own benevolent quest. But will his actions be the ruin of the entire arcade? WE MAY HAVE TO WATCH THE FILM TO FIND OUT.

PLUGS AHOY! (don’t worry, it all gets a lot more exciting from this point onwards)

Look at Ralph, giving out some Pac-Man cherries to the kids of Q*bert like a saint. And more importantly, is that CHUN-LI and ZANGIEF chillin in the background? It so is.

This chick is from some game called Sugar Rush, which is apparently a racing adventure where everyone gets hopped up on sweets and then ploughs about. Deeply unsafe, and voiced by Sarah Silverman. DOUBLY unsafe.

And finally, it’s the lady we’ve all been waiting for:

Oh Jane. She’s playing a character from a game called HERO’S DUTY, which basically means that Disney couldn’t get the rights to the Halo name, but never mind. We’re loving the cross-pollination of classic 80s and 90s games with cutting edge stylings. MORE, dammit. MORE!