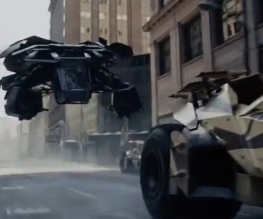 In just over a month, Christopher Nolan’s genre-defining Batman trilogy will come to an end when The Dark Knight Rises swoops into theatres. We’re confidently expecting another sixty or seventy promotional clips, images, commemorative tea towels and so on to be released between now and then, but before we become entirely jaded we’d like to draw your attention to this really quite interesting new TV spot. It’s got everything – a bit of JGL (or AZRAEL DEFINITELY AZRAEL, as we like to call him), Bane about to break someone’s neck (in preparation for breaking Batman’s back?) and, appropriately enough, Bruce Wayne himself hobbling around with a cane. Maybe Bane’s just going to go for his Bat-knees?

But more to the point, this clip has more than a hint of everyone’s favourite bow-tied R&D maverick Lucius Fox – and one of his new toys. Take a peek:

“I call it the Bat… and yes, Mr Wayne, it does come in black.” WOO HOO, CALLBACKS!

Will you be wearing a home made costume to the cinema? You totally will.

Previous: New poster for The Expendables 2 is flamey
Next: Jonah Hill returns to Django Unchained