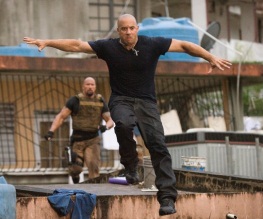 ‘Why’d you drag us half-way round the world?’ asks Ludacris. Why to film the fifth instalment of the Fast and The Furious franchise of course!

That’s right there’s another one, this time reuniting members of the original cast to drive cars around the exotic location of… Brazil! What’s in store? Well this brand new trailer suggests as well as driving cars, Vin Diesel and his crew are planning the small matter of a $100-million heist, and not from a bank either, from a police station!

An impossibly huge Dwayne Johnson (that’s The Rock, you know, the wrestler) hunts them down whilst earnestly warning ‘Don’t ever, ever let them get in the cars’. Well Dwayne I have a sneaking suspicion they’ll be doing just that! Repeatedly in fact! Vroooom!

Expect to see Fast Five in UK cinemas from the 29th of April.