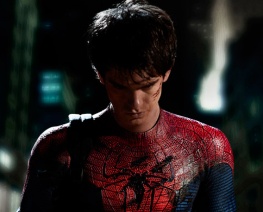 I think I may have discovered a new stage of grief.

After hearing of Sony’s plans to reboot their Spider-Man franchise, I slowly progressed from denial (there is no way Madame Web is going to allow this to happen), to anger (Sony are idiot-heads!), to bargaining (I’ll give you everything: my poor vision, my student debt…), to depression (*sob*), to acceptance. Having seen just how natural Andrew Garfield looks in the costume, however, I have found myself at a new stage entirely: glee.

Thinking about it, Sam Raimi’s Spider-Man was actually crying out for a friendly neighbourhood reimagining. Gone are the wet looks from Tobey Maguire, the dissatisfaction of Kirsten Dunst and the mawkish patriotism – remember the case of Green Goblin vs. The City of New York? There you go – of the Raimi years. If this new image is anything to go by, the new Spider-Man movie is going dark (aren’t they all?) and our hero is in for an intriguingly rough ride under Marc Webb’s new direction. Having seen the new image (via the film’s official Facebook page) I am perfectly willing to suspend my worries that the wall-crawler is destined to lose his funny bone in a blind, Nolan-esque pursuit of realism. Instead, I am simply relieved that Garflield looks so jaw-droppingly awesome in the role. The costume tweaked to give this Spider-Man his own identity, the term that instantly jumps to mind is Kick-Ass, perhaps my favourite hypehenated word of 2010.