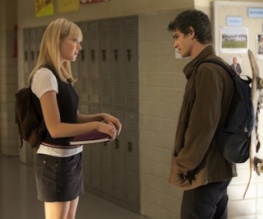 So they’re making a new Spiderman film apparently. WHO KNEW? That’s crazy talk if you ask me, seeing as how awesome Spiderman 3 with evil Tobey Maguire was. Remember that? It was a simpler time. A happier time. Anyway here are some boring ass photos from the new film.

Here’s Andrew Garfield (Mr Spiderman) and Emma Stone (Mrs Spiderman) in a school corridor, presumably talking about how goddamned adorable they both are.

Conversation sample –
Mrs Spiderman: Listen, I can’t do this any longer. I have my schoolbooks and sweater vests to think of.
Mr Spiderman: I like skateboarding. This one’s slightly better as it sheds some light on how deeply the film will delve into the lesser known “Spidey poledancing” storyline from the original comics. Look at that patron trying to get handsy! No touching random patron! You know the rules. So the film is out on the 4th July over here. INDEPENDENCE DAY! Hurray. Maybe we could all celebrate by watching Independence Day and then hugging a signed photo of Tobey Maguire.

Excited for Amazing Spider-Man or fed up already? Let us know below!