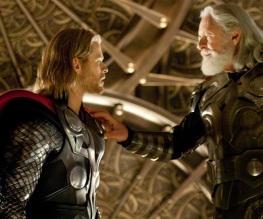 In a strange bit of direction, Kenneth Branagh is taking the lead for new action fantasy epic Thor. The film, out on the 27th of April and starring Natalie Portman, Anthony Hopkins, Stellan Skarsgard and Kat Dennings, has a new trailer following on from the teaser last year, which promises earthly chuckles along with its big scary CGI monsters.

The plot seems to revolve around Thor’s brother Loki (Tom Hiddleston) deciding that he wants to destroy everyone on human Earth, and muscled Thor, the banished son of Odin, having to defend us mere mortals. It feels like that there’s enough light capering around America to satisfy those who don’t want to watch two hours of special effects, but enough explosions to keep the boys happy. Everyone wins!