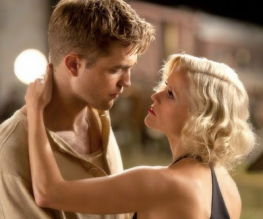 The second Water for Elephants trailer gives us some more back story as to how Jacob Jankowski (Robert Pattinson) came to be working for the Benzini Brothers’ Most Spectacular Show on Earth in 1930s America. His life falls apart after the death of his parents during his veterinary exams at an Ivy League college, and after some poetically aimless wandering he jumps aboard the circus train. What follows are lots of shots of beautiful people gazing wistfully at each other whilst ominous music and an increasingly angry Christoph Waltz let us know that a happy ending won’t be that easy.

I must say my little heart is torn in two about this film. I really really really want to like it, because the book is wonderful (go, now, read it) and in several ways it looks promising. Christoph Waltz is perfectly cast as the charming but volatile ringmaster August Rosenbluth, and the sets and cinematography look sumptuous. Hopefully Pattinson will prove that he can do more than look melancholy and brooding, while Reese Witherspoon, starring as circus performer and August’s wife Marlena, is usually a reliable bet.

This second trailer concentrates on the forbidden romance between Marlena and Jacob, and while I understand that’s a great selling point for the film (R-Patz has sex!), I hope the script won’t focus on it to the detriment of the novel’s other characters and sub-plots, such as the wonderfully imagined Rosie the Elephant.