Nicolas Cage gets Left Behind 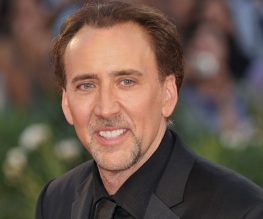 Nicolas Cage is set to star in a film adaptation of the wildly popular Left Behind book series, with a planned trilogy in the works. Left Behind is a series of books by authors Tim LaHaye and Jerry B. Jenkins, detailing the events that occur on Earth after the Rapture has taken place and all the good, Christian folk have been taken up to heaven.

According to Wikipedia, the series deals with “Christian dispensationalist End Times: pretribulation, premillennial, Christian eschatological viewpoint of the end of the world.” So… yeah.

By all accounts, the books aren’t particularly well written (there are sixteen of them, by the way), and they have already been given the film treatment in three straight to DVD attempts starring Kirk Cameron that nobody has ever seen or heard of. Enter Nic Cage!

We know that Nic Cage is pretty good at saving the world. He’s done it loads of times. But this is on a whole other scale, and we wonder how he’ll cope with putting this particular bunny back in the box. While the concept as a whole demands an acceptance of the Christian version of the world, potentially removing a rather large swathe of the global audience instantly, this new version promises to go back to basics, and present more of a straight-up disaster movie tableau, than an overtly religious one. The budget is only $15 million, however, so quite how they’ll be able to depict a quasi-apocalypse on such a modest amount remains to be seen.

If Left Behind can come anywhere near the brilliance of the American Dad episode that charted similar waters (seriously, give it a watch here. It’s a corker!), then this could be huge amounts of fun.

There’s just one thing that worries us… Surely, come the Rapture, Nic Cage should be the FIRST one into heaven?!

Previous: RZA’s The Man with the Iron Fists gets an animated prequel
Next: Iron Man 3 Sneak Preview