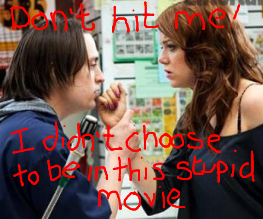 Most of the trailer views like a call to arms for all actors everywhere to forgo their dignity, although the end of the trailer descends into Jason Sudeikis making jokes about Kristen Bell‘s vagina, over and over again. Thankfully we don’t live in a world where Jason Sudeikis has to stare at Barack Obama’s crotch and make jokes yet, although maybe after the next election?

It might just be funny. At the moment it looks less like a comedy and more like Valentine’s Day with dirty jokes. Movie 43 hits the screen in late January 2013. Just so you know what you’re getting into, Movie 43 will star (deep breath):

If you like any of those people, get ready to experience at least 14 seconds of each of them in Movie 43. What we’ve taken from this is that the film needs more Barack Obama, and that Jason Sudeikis needs to go away now, please.

Movie 43 – funny or stupid? Can we expect a cameo from the re-elected President Obama? (Spoiler! Probably not)

Previous: Nic Cage Expendables casting rumour is news to Stallone
Next: Alex Proyas on board to direct Robopocalypse author’s Amped