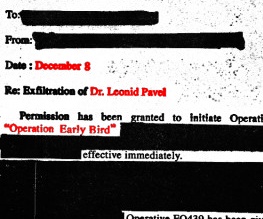 Yesterday evening we published an analysis of what appeared to be the beginning of the viral advertising campaign for Christopher Nolan’s third Batman film, The Dark Knight Rises. Today, our suspicions have been confirmed – and the clock has begun to tick.

Following the release of two classified documents to Empire and Wired, a third partially-redacted page has been revealed on the official Twitter account for The Dark Knight Rises. Take a look (click to enlarge): Well, this is BRILLIANT. Apart from anything else, it basically confirms our supposition that what we now know to call Operation Early Bird is the mission that Bane is due to crash in the Dark Knight Rises prologue due to be shown before IMAX screenings of the new Mission: Impossible film – note the bit that says Operative FO439 will be assigned “aerial transport” as well as Special Forces soldiers. No clue as to who Operative FO439 is – the number refers to a former British consulate in the Latvian city of Liepāja, but we suspect that’s just a coincidence.

There’s very little else to go on, other than the guarded references to Operation Early Bird’s ‘black’ status – the unnamed operative in charge will be relayed his information through a Numbers Station (that’s a coded short wave radio transmitter to you) – and the fact that yesterday’s CIA Station Chief evidently managed to clear the militia’s demand for $3 million in return for Dr Pavel. Finally, the message gives the H-hour of Operation Early Bird as 10:00 PST, which (given that the first paragraph seems to say that the orders are ‘effective immediately’ and the letter is dated yesterday) presumably refers to today.

10:00 PST is 18:00 GMT, as a visit to the Operation Early Bird website reveals. The site currently contains nothing but a countdown timer ticking implacably down to 6pm:

However, some bright spark looked in the sitemap and found another page, which has since been hidden. However, this is what was on it: Obviously enough it’s a map, with coordinate input fields. It’s unlabelled, but that’s clearly the US eastern seaboard – the map extends as far as Chicago in the west, Boston in the east and Nashville in the south, although that may just be an arbitrary starting point for it. We’ve got nothing else for you now, but check back this evening!

Have you found out anything else about Operation Early Bird? Let us know below!