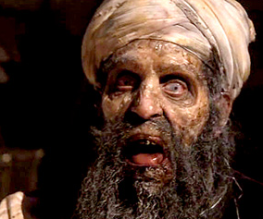 Osama Bin Laden‘s waterlogged corpse has been feeding various marine life for some time now, and some awful human beings have decided that the time is right to make Osombie, which is exactly what it sounds like. Osama Bin Laden the Zombie. Yes, you read that correctly. Move aside, Zero Dark Thirty, we’ve found our hard-hitting drama about the hunt for Osama Bin Laden.

The trailer is, well, ridiculously bad. It doesn’t look funny, it doesn’t look exciting, it doesn’t even look particularly offensive, although that’s probably not for lack of trying. It’s hard to imagine who thought dressing people up as dusty Afghan corpses and shooting them in the head was a good idea, but apparently there are all kinds of mental illness out there that could account for this travesty. We’re just glad that Osama Bin Laden isn’t alive to see his good name dragged through the mud.

The only positive note we can think of is that at least the CGI is about as good as what we’ve seen in the trailer for World War Z, although at least Osombie has an excuse. You can thank Kickstarter for this, by the way. No other method would have gained $30,000 to kill Osama Bin Laden all over again. Thanks, Internet!

Luckily, we won’t be subjected to Osombie more than necessary, the film is heading straight to DVD. With any luck, they won’t think to send a copy to the Best For Film Secret Volcano Lair, otherwise we’ll be forced to review it. Either that or we’ll chuck it in some lava.

Osama Bin Laden eating man-flesh: offensive or just stupid? Let us know in the comments below!

Previous: So Undercover
Next: Joss Whedon gets all Shakespearean in June 2013