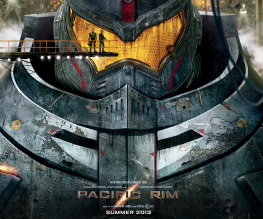 You didn’t think Pacific Rim could get any better, did you? Neither did we, but it’s just strapped on a jetpack and launched us into MIND = BLOWN territory. We’ve already had our socks blown off by the first trailer AND the second, and now we get some concept art for us to chew on and get progressively more excited about, courtesy of those lovely folks over at Total Film.

The first Pacific Rim artwork features a foreboding looking giant robot in the distance and a lot of snow. It’s all very ominous and dreary and rather sinister; IS THAT ROBOT MEAN OR GOOD? We’re going with good, as the Pacific Rim plot features robots (known as jaegers) fighting alongside humanity against primeval monsters known as kaiju. The giant robot in this image is actually a “Russian colossus”. Eeeeeeeeee.

You want more? We’ll give you more. The second lovely jubbly bit of concept art is slightly more colourful, but all the more bewildering. Of course, it’s never straight-forward with del Toro, which suits us just fine. It looks as if an archaic… skull… type… thing has landed (grown?) in the middle of an Asian city, with citizens and tourists gathering around the giant Skull Temple looking confused (it is in fact a Skull Temple).

These wonderful Pacific Rim delights have been done by Doug Williams, and we heartily approve and applaud him. Hurrah!

Meanwhile, del Toro keeps us all updated with Pacific Rim 2 updates: “Travis [Beacham, co-writer] and I have been working on it. We co-wrote the screenplay on this first one, and now we’re hard at work at doing the second one. We want to take however long it takes to really find out the idea and try to bridge something that really makes the mythology roll.”

Guillermo del Toro will be focusing on his haunted-house ghost story Crimson Peak in the meantime, adding that he intends to “subvert the rules of the usual gothic romance.” Yippeeeeeeeeeee. SO MUCH DEL TORO-NESS TO BE EXCITED ABOUT. Now spend your pennies on Mama this Friday and show your del Toro support.

What do you think of the new Pacific Rim concept art? Love it? Hate it? WHY?