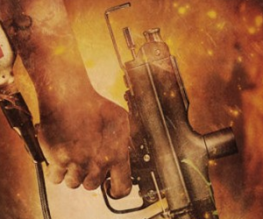 “Paintball + propane = flamethrower” – did you know that? Do you care? Yes you do, because Paul Giamatti features in the fantastically named film brought to you by geek extraordinaire slash director Don Coscarelli (Phantasm, Bubba Ho-Tep, Masters of Horror TV series), and that insightful equation is featured on a new poster for his film John Dies at the End.

Don Coscarelli’s new film centres around a totally wack new drug (streetname: Soy Sauce) that gives you so much of an ‘out of body experience’ you’re left, literally, not human anymore. This is causing quite a problem, so in come two college dropouts to rescue the fate of mankind with a flamethrower battling what looks like rejected aliens from the Men in Black special effects department. 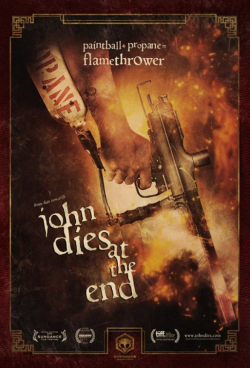 The poster features a paintball gun labelled ‘opane’ which we assume is actually propane. There is also half an arm and a lot of fire, but this arm is seemingly flame-proof so remains unharmed, thank God (could this be Paul Giamatti’s arm? Who knows). With what we know of the film already it’s safe to assume that this make-shift weapon will not be the answer to saving the world from a horrible invasion. That being said, as with Don Coscarelli’s previous films, we can expect a good amount of horror and comedy along the way, so that’s something.

There is, unfortunately, no sign of Paul Giamatti in the poster, which is distrastrous news.

Does this poster excite you? Will you be going to see John Dies at the End?

Previous: Ryan Gosling broods in first footage from Only God Forgives
Next: Pixar releases clip from The Blue Umbrella