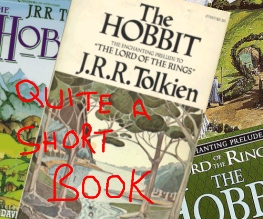 Perhaps we should have expected it all along. Latter-day Tolkien and part-time Istari Peter Jackson has once more taken to his Facebook page – this time to tell his legions of forgiving fans that he is, for some reason, going to wring an entire trilogy out of not-even-very-long children’s book The Hobbit.

It’s bloody years since we got over the fact that The Hobbit was going to be two films, and we’re even over it being in 3D now that that 48fps shooting rate has made the trailer so pretty. But three films, Pete? Must we? Jackson had, amongst other things, this to say:

We know how much of the story of Bilbo Baggins, the Wizard Gandalf, the Dwarves of Erebor, the rise of the Necromancer, and the Battle of Dol Guldur will remain untold if we do not take this chance. The richness of the story of The Hobbit, as well as some of the related material in the appendices of The Lord of the Rings, allows us to tell the full story of the adventures of Bilbo Baggins and the part he played in the sometimes dangerous, but at all times exciting, history of Middle-earth.

Hold the phone, Jackson. The Battle of Dol Guldur happens during the War of the Ring. We KNOW THAT. Exactly how fast and loose are you playing with Tolkien’s chronology here? This could be ever so slightly disastrous…

Will you see all three Hobbit films? Obviously you will. Let us rephrase: will you do it willingly?

Tags :hotteststoryPeter JacksonThe HobbitThe Hobbit: An Unexpected JourneyThe Hobbit: There and Back Again