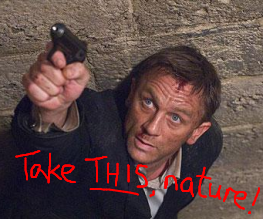 Pinewood Studios, located in the land where dreams are made (Slough), has been trying to push forward a £200 million expansion plan for the last 7 years, but have faced stiff opposition from the “Stop Project Pinewood” movement. The principle objection against a bigger, better Pinewood Studios is that the expansion would be into protected greenbelt land. There doesn’t appear to be any solution that could satisfy both sides.

Perhaps due to recent big budget movies filmed at Pinewood Studios, such as Skyfall, the latest expansion proposals have received over a third fewer letters of objection than previously (324 to 212). Furthermore, letters of support for the Pinwewood Studios expansion have increased by 50% (254), passing the number of letters objection.

This change in the wind is good news for Pinewood Studios, who have been hoping to double in size. With the news that Star Wars: Episode VII will follow Star Wars tradition by being shot in the UK, Pinewood Studios will be looking to entice as many other big international film projects as possible.

Solid film industries can be great for tourism and the economy: the Pinewood Studios expansion proposal claims it will create 3000 new jobs and inject around £150 million in to the economy every year. Of course the numbers come from the people who want the expansion so we might want to exercise a note of caution.

We at Best For Film encourage the expansion of the UK film industry, including the Pinewood Studios plans, but we are also tree-hugging flower-power hippies who love our greenbelt as a means to limiting urban expansion and stopping that smelly sticky London air leaking into the surrounding home counties. Perhaps we could just tear down the rest of Slough and turn it into a national park in exchange for a bigger, better Pinewood Studios?

How do you feel about the Pinewood Studios expansion? Should we sacrifice our greenbelt for fake streets and soundstages?