Piranha 3DD will ravage our cinema screens after all 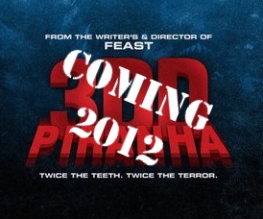 In a shock reversal of yesterday’s soi-disant ‘news‘, we’re very glad to hear that Piranha 3DD director John Gulager has explicitly confirmed that his teeth’n’tits horror sequel will not be banished to straight-to-DVD-dom.

Here, edited for your convenience, is more or less what he told the folks at Shock Till You Drop:

“…I can tell you that at 6:30 pm on December 19th, my birthday, the sound mixing for Piranha 3DD was done and the film was finished.

The plan is to come to theaters this Spring in 3D(D)!

The original November release date was made before we started filming. As Melton says, “…the Thanksgiving release was always overly optimistic.” Ha, ha, that’s a good way of putting it! The main problem was this thing called Winter. There was no way we could ask anyone to strip down and jump into the water. Besides being inhumane and stupid, even with ‘movie magic’, it would be too dangerous. So we waited until it was warm enough to shoot but not so late that our main location became unavailable (open to the public) and started shooting in real 3D on April 25th, 2011.

We shoot the movie. Zany antics ensue. We edit over the summer. Work on visual FX, sound and music (songs). Get a couple days of pick-ups. Get a composer.

We released a short teaser trailer on the Spike Awards in October to give a taste of what’s in store but had to let go of the November theatrical date. The film just wasn’t totally finished. When that happened any planned releases around the world had to be scrapped and reset because Piranha 3DD must be released here, in the US, first. I think this is a Spring film anyways…”

Still no release date, obviously, but at least we can look forward to seeing legions of busty teens getting shredded in glorious widescreen 3D! If, indeed, that is something to look forward to. Whatever happened to just enjoying Playdays or something? I feel dirty.

Previous: Amanda Seyfried is Hooper’s Cosette
Next: There is no updated Dark Knight Rises prologue