Pirate Intruders Tackled Before They Get To Depp 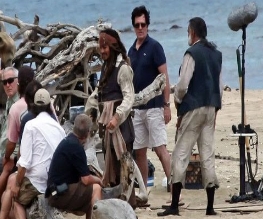 We all have our foibles. Some of us chew with our mouths open. Some of us have stalkerish tendencies (my friend wanted to kidnap Cheryl Cole and keep her in our basement). But the point is, we do our best to work on our downfalls in order to fit into society. But there are some of us who act on such impulses. Like the two fellas who had such a yearning to be near Johnny Depp, they sneaked on set in order to get into his trailer. In full pirate get-up.

But come on. We’ve all done it. Blagging ourselves into a club, slurring “I’m on the guestlist”. The only difference is, instead of being looked at like a fool and turned away, our two pretend pirates were wrestled to the ground before they could even touch Johnny Depp’s dreads.

I do admire their efforts. I love the way that they just decided to deck themselves out in (I assume) authentic-looking Pirates of The Carribbean gear, stroll along to Johnny’s trailer probably feeling quite smug, before being rudely rugby tackled by the bodyguards, who were probably not decked out in pirate splendour. Party poopers. But, hey it’s something to tell the grandkids.

And they weren’t being overly ambitious thinking that they could sneak in, either. Last week, Captain Jack Sparrow look-a-likey, Darren Potter managed to fool security. Oh, he’s gooood.

Previous: Artists: You don’t have to sell out to cash in.
Next: Gemma Arterton and Sharlto Copley joining Men in Black III?