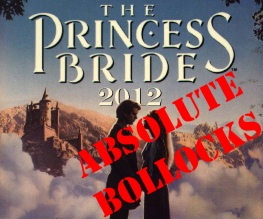 So! This morning we nearly had a heart attack when we noticed that ‘The Princess Bride’ was trending on Twitter. In case you haven’t just been for a look before reading on, it’s trending because twenty million people are writing anguished tweets about how Jason Reitman is allegedly remaking the classic comedy fantasy action romance satire (originally directed by Rob Reiner, obvs) with Paul Rudd and Mindy ‘who?’ Kaling in the roles made famous by Cary Elwes and Robin Wright. Needless to say, this is the worst news ever.

We’d got halfway through writing a ranty blog about what an utterly awful idea the remake was was before we bothered to read the original article on the website of Paste magazine. The title of this article is ‘Jason Reitman Announces Cast of Princess Bride Reading’.

This really is the most extraordinary example of Twitter hysteria we’ve ever seen. Jason Reitman, the repeatedly Oscar-nominated director of Juno and Up In The Air, has recently been amusing himself and others by organising readings of iconic films with contemporary casts. This is a great idea, n’est-ce pas? A few months ago he cast Aaron Paul, Jennifer Garner and sundry others in a READING of The Breakfast Club, and more recently Steve Carell and Natalie Portman starred in his READING of The Apartment. He then decided to tackle The Princess Bride (as well he might, it’s a cult classic), which he duly did with a cast including Rudd, Kaling, Patton Oswalt and Nick Kroll. In December.

Did you get that, Twitter? The READING that you have somehow mistaken for a real actual real film happened LAST YEAR. We even have a photo of it happening: Does that look like a film set to you? Jesus.

Did you nearly have a cardiac arrest when you saw Twitter? Are you now furious with the legions of twats spreading misinformation across the Interwebs? Vent your spleen below!