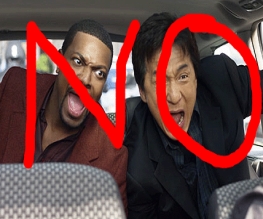 Rush Hour 4. Like Ice Age 4, but worse. We can’t even. After unfunny trainwreck after unfunny trainwreck, we had all blissfully forgotten, Jackie Chan had redeemed himself by starring in the gem below, no one knew if Chris Tucker was alive or dead (like Tupac) and we were all fine. FINE. WHY COULDN’T YOU JUST HAVE STUCK WITH MULAN, JACKIE? WE LOVE YOU WHEN YOU SING.

Producer Arthur Sarkissian, who we hope is as full of pretentious shit as his surname, had this to say:

“I am working on it right now with Chris Tucker and Jackie Chan. I’m trying to do it closer to how I did Rush Hour 1, more down to earth, more gritty, introduce two new characters and make it real the way the first one was. I personally was not happy with the third one. I thought 1 and 2 were very good. I think 3 got out of hand a little bit. It’s not a matter of just bringing them back to do another segment of that or a sequel to it by putting them in another city and having them bicker. I don’t want that. I want something new.”

WE HAVE MANY PROBLEMS WITH THIS:

1) It’s a film, you twat – it’s definitively never real.
2) NO ONE WAS HAPPY WITH THE THIRD ONE. IN THE WORLD. THIRDS OF ANYTHING ARE HARD TO SELL – cf. The Father, the Son and the Holy Spirit (God, Jesus and something too “profound” (read: fabricated) for anyone to care about).
3) Putting them in a city and having them bicker is the whole point of these films – albeit with wildly variable levels of racial aggro.
4) If you want something new, why make a fourquel at all? There’s a wide open market for Hard Shoulder Roadworks or Closed Slip Road or Gridlock or Lane Closed by Overturned Lorry. The M25 is your oyster, Sarkissian.

Can we all cross everything we’ve got – yep, even that, business this serious doesn’t give a shit about your future fertility – that director Brett Ratner pisses all over this.

Previous: Another Skyfall teaser trailer
Next: Thinking outside the D-Box – BFF goes four-dimensional