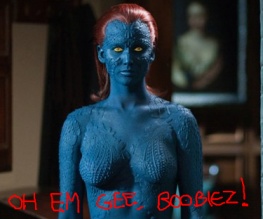 Whilst the above might not be strictly true, it’s pretty easy to believe given the rather worrying way in which 20th Century Fox has chosen to plug X-Men: First Class‘s release this week. Rather than focus on the film’s political subtext, stellar cast or unique narrative background, Fox has decided that the aspect of their $125m film which most deserves attention is the fact that some of the actors in it have tits.

The stills and posed shots below have absolutely no value other than that of demonstrating that January Jones does indeed have superb breasts even when they haven’t been turned into diamond, whilst no red-blooded mutant is likely to push Jennifer Lawrence or Zoe Kravitz out of bed either. Admittedly Emma Frost has always been a bit of a hooker, but the other two characters are so interesting – we finally get to meet pre-evil Raven/Mystique, whilst Angel Salvadore’s physically unsettling mutant gifts have always made her one of the most interesting X-persons. Why does it have to be tits?!

Just look at this. Except don’t, because then the Man has won. You probably scrolled down to them before you read the article, didn’t you? Well, at least nobody will notice if she isn’t very good. Strip club. Angel Salvadore. Strip club. Why does she have to be a stripper? And I know Mystique generally hangs around looking all blue and naked, but we’re on an indignant roll here so we’re going to whinge about that too. Jennifer Lawrence is REALLY REALLY GOOD! Pfft, if you want us we’ll be talking to the Daily Mail about how all men under the age of thirty or over the age of thirty-four are paedophiles who give you cancer.