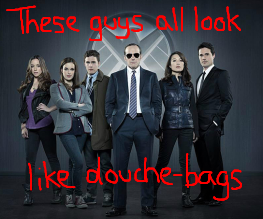 S.H.I.E.L.D. is the organisation responsible for… well we’re not sure exactly what they do, but it has something to do with telling superheros who to punch. Agents of S.H.I.E.L.D. features Clark Gregg reprising his role as Agent Coulson, and the first promo for the ABC series has hit the intertubes. It’s a little rough, but hey, it’s on a massively reduced budget from Marvel Avengers Assemble. Frankly, we’re still looking forward to it.

Compared to the Agent Coulson we came to know and love (and mourn… sort of), the one in the TV promo is a little more assertive and generic than we’d like, but the video was far too short to get a sense of the show’s style in both writing and effects. Expect to hear a hell of a lot more about Agents of S.H.I.E.L.D. over the coming weeks, especially rumor and debate over why Agent Coulson is still alive despite the show being set AFTER the events of The Avengers.

Starring Clark Gregg, Ming-Na Wen (remember her?) and a bunch of other random attractive people from other TV shows, expect Marvel Agents of S.H.I.E.L.D. to hit ABC sometime soon. Let’s hope it gets better treatment than other Joss Whedon TV shows…

Agents of S.H.I.E.L.D. – great idea spunoff a great film, or a low-budget cash grab? YOU DECIDE.

Previous: Star Trek Into Darkness
Next: Man of Steel gets yet another TV spot