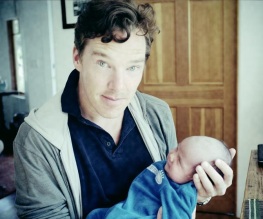 Sherlock Holmes. What a great guy he is, especially when played by a raven-haired Cumberbatch (expert baby handler). Sadly, Sherlock fans of the world, you’re going to have to wait a little longer than you expected to see old Cumby crop up on your television screens again. As we all know, Benedict has been busy vamping it up in the brand new Star Trek film. But on top of that, he’s got Terry Jones’ comedy Absolutely Anything and Steve McQueen’s historical epic Twelve Years A Slave to get through. Not to mention playing a bloody great dragon in all the Hobbit films. Oh, and you know who else is in the Hobbit? Martin Freeman. Yeah. That other bloke from Sherlock. You’re starting to get the picture, right? BASICALLY EVERYONE INVOLVED IN SHERLOCK IS TO BE BUSY TO BE IN SHERLOCK.

Which means that the filming of Sherlock series three probably won’t start until March 2013. The knock-on effect of this is that we are probably looking at a Christmas broadcast, which will be cool as it will be all Christmassy and what says CHRISTMAS more than Benedict Cumberbatch in a big coat solving murders? Sadly, though, this also means we have to wait a YEAR – a whole YEAR! – to find out how he, you know, faked his own death and shit. THIS IS UNFAIR. SHERLOCK SHERLOCK SHERLOCK WE WANT SHERLOCK NOW.

Are you sad in your heart now? Try looking at that photo of Benedict and the baby again. That should soften the blow.