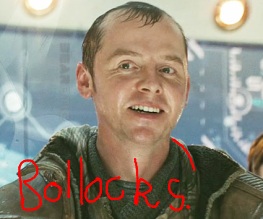 Pegg, who will be reprising his role as troublemaking engineer Montgomery ‘Scotty’ Scott, scotched the rumours which briefly took over the Internet last month in much the same way that genetically-enhanced tyrant Khan Noonien Singh intends to take over the galaxy.

Speaking to the Telegraph, the Shaun of the Dead star described Cumberbatch’s character as “not just another disgruntled alien” but went out of his way to insist that “It’s not Khan… that’s a myth. Everyone’s saying it is, but it’s not.” Despite his fanboy past, he went on to attack the timeless pastime of spoiler-hunting: “It masquerades as interest in the movie but really it’s just nosiness and impatience. You just want to say, ‘Oh fuck off! Wait for the film!'”

Back to the drawing board, then. Does anyone have any other ideas?

Previous: First trailer for Les Miserables hits the net
Next: Rebecca Hall and Bruce Willis in trailer for Lay the Favorite