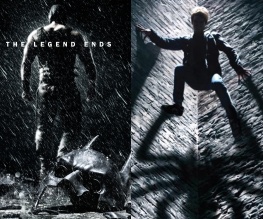 After the crushing disappointment of The Dark Knight Rises‘ apparently interesting viral campaign (it turned out to be nothing more than a way of plugging the IMAX locations which will be showing a DKR preview before Mission: Impossible – Ghost Protocol), we’re not feeling very festive as far as Team Nolan’s concerned.

Fortunately, Chris has gone some way towards cheering us up by wheeling out a rather snazzy new poster for the impending Batman threequel – and unless appearances are very deceptive, he appears to have charitably knocked one up for competing superhero reboot The Amazing Spider-Man as well.

Notice any similarities? They’re both classic Nolan posters – shadowy figure stands alone in a location with very poor lighting and either bad weather or exposed brickwork. We actually quite like the Dark Knight Rises poster – Bane is going to be an utter badass, after all, and the broken mask is fun – but what on earth is Spidey doing looking so grumpy?

Let’s look at the evidence. The Amazing Spider-Man poster is virtually all in monochrome, and it shows Andrew Garfield’s masked hero backed into a corner and very conspicuously alone. Alright, so he’s got an interesting shadow – but so what? It doesn’t even make sense, anyway, it should be the other way up.

We’re just rather concerned that dear Peter Parker might be going a bit emo, and we don’t want that. One of the highlights of Sam Raimi’s Spider-Man trilogy was how well he brought the comic book hero to life, complete with his trademark wisecracks and infectiously upbeat attitude – Spidey should be a superhero who actually has fun while he’s beating up villains, not another gritty and realistic Nolan-alike moper. Nobody’s denying that Nolan has done extraordinary things for the superhero genre, there’s no need for every reboot to ape his interpretation of Batman. Cheer up, Pete. Please?

Previous: BFF Advent Calendar – 11th of December
Next: Trailer for Nicholas Sparks’ The Lucky One