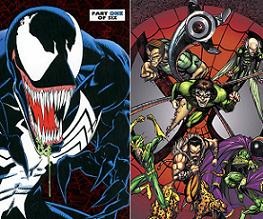 It’s starting to feel like December is Spider-Man month over at Columbia Pictures. It’s only been a week and a bit since the studio put out its first trailer for The Amazing Spider-Man 2, but already they’re hitting fans with yet more updates, today confirming not one, but two new web-spinning spin-off films: one based on the ever popular foe Venom and another on Spidey villain conglomerate The Sinister Six.

Those unfamiliar with the comic books may remember Venom from Sam Raimi’s ill-fated trilogy closer, Spider-Man 3, which saw a distinctly unimposing Topher Grace woefully miscast as the usually brutish Eddie Brock. A form of anti-Spider-Man, Venom comes about when Brock is consumed by a malevolent symbiote (alien or genetically engineered, depending on the version), with both parts of the resulting beast having its own reasons to be pissed off with their wall-crawling nemesis. With the character having also been used as something an anti-hero in the comics, there are a number of ways Sony/Columbia could go with the project, which – despite previously being connected to Chronicle director Josh Trank – is now being linked to Amazing Spider-Man 2 scribes Roberto Orci and Alex Kurtzman, alongside Bill & Ted co-creator Ed Solomon. Kurtzman is also expected to direct. A Sinister Six spin-off, meanwhile, is somewhat uncharted territory. Though the Amazing Spider-Man series has been consistently hinting toward such an assembly of villains (the recent trailer contains a fan pleasing nod to both Doctor Octopus and the Vulture, as shown above), it had always been assumed that these characters would unite in an upcoming sequel, rather than a film of their own. Which begs the question: who are the baddies going to be fighting, if not Spider-Man? Each other? It’s certainly a possibility. Drew Goddard, who has also recently been hired by Marvel Studios to helm a 13-part Daredevil TV series, is attached to write and direct.

With this so called “Franchise Brain Trust” of talent said to be working closely with Amazing Spider-Man producers Avi Arad, Matt Tolmach and director Marc Webb to “develop a continuous tone and thread throughout the films”, Columbia Pictures president Doug Belgrad seems confident. “We believe that Marc, Alex and Drew have uniquely exciting visions for how to expand the Spider-Man universe in each of these upcoming films”, he has commented – and as long those visions don’t involve Spider-Man performing dance routines and back-handing his girlfriend, we’ll probably be interested.