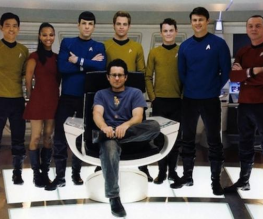 The thought of a big ol’ IMAX screen with the shiny lens-flarey Star Trek Enterprise in glorious 3D (don’t worry, we hate 3D too) sounds rather exciting. Star Trek Into Darkness will probably be a film, like Mission: Impossible – Ghost Protocol, that is best seen in an IMAX theatre. The thought of a 200 ft 3D Benedict Cumberbatch is both horrifying and deeply alluring at the same time, and his oddly plastic and stretched face should be good competition for Zachary Quinto. Star Trek Into Darkness is shaping up very, very nicely.

Set your phasers to ‘Awesome‘ when Star Trek Into Darkness hits in May 2013, and prepare to be boarded by Chris Pine, ladies. Hopefully this time we should get a fully formed and beautiful bromance blossoming between brand-new best buds Kirk and Spock.

It should be enough material to write homosexual cross-species fan-fiction for years.

Will you be watching Star Trek Into Darkness in IMAX? Is the extra price for a ticket worth it?