Star Wars Episode VII to be directed by Matthew Vaughn? 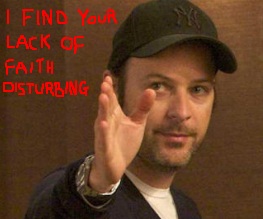 Yes, Star Wars now belongs to the dark side, but let’s get past that. After all, didn’t the Empire have all the cool stuff anyway? Someone who definitely belongs in a drawer marked ‘cool stuff’ is director Matthew Vaughn, who recently walked away from the upcoming X-Men: Days of Future Past. What could be cooler than helming the next installment of X-Men, we hear you ask. Whisper it, because it’s firmly in the realm of hearsay and conjecture at this point, but it’s been reported that Star Wars beckoned, and Vaughn could be in talks to take the wheel for Episode VII, slated for a 2015 release.

Without getting into the dusty debate over whether Star Wars has anything left in the tank, the bottom line is that there will be more of them. Considering this, rumours of Matthew Vaughn’s attachment to the franchise offer just the slightest, sharpest glimmer of hope for a purposeful and well-realised new direction. X-Men: First Class was true to its title and surprised everyone by emerging a cohesive, well-defined and notably distinct new branch for an already well-known franchise. If there’s one thing Star Wars needs, it’s revitalisation, not an attempt to re-engage with everything we know as well as the smell of our own farts.

Vaughn’s attachment is a rumour at this point, and there will be many, many more before Star Wars finally becomes a tangible reality again. What gives this the slightest bit of traction is the timing of his departure from X-Men, and the fact that he just seems a remarkably solid fit for Star Wars. We think so, anyway. Surely it’s better to cling to the hope that new Star Wars films might be a beautiful resurrection, rather than throw the franchise down a generator tube-y thing like the decrepit space-prune it is.

Who do you think could give Star Wars a shot in the arm? Answers below…

Previous: The Big Lebowski themed restaurant in Iceland is real
Next: King of Devil’s Island