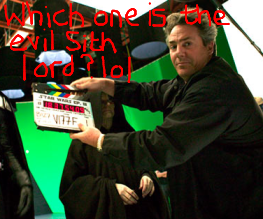 Star Wars producer Rick McCallum, a principal force (HA!) behind the Star Wars Special Edition re-releases in 1997 (ugh) and the Star Wars prequels (double ugh), has finally buggered off to a galaxy far, far away. As nerds breathe a collective sigh of relief that Rick McCallum won’t have anything to do with the new Star Wars trilogy, we reflect on all the good he has done for Star Wars.

From the woefully inept CGI abortion that was the Star Wars Special Editions, to the confusing bipolar fan-service to fan-loathing to fan-service decisions in the Star Wars prequels, Rick McCallum has never been particularly loved by fans. His main job was as George Lucas‘ right hand man, an ironic relationship that mirrored Darth Vader being Palpatine’s bitch. The primary producer role for the new films, if you remember, has gone to Kathleen Kennedy of Disney Corp, who has the advantage of seeing exactly what NOT to do with a Star Wars film. We can give McCallum kudos for that, if nothing else.

As McCallum put it in his leaving statement:
“There’s only one person in the world who could do this, and that’s Kathleen Kennedy. There’s no one more suited who is able to bridge the worlds of elite filmmaking within a studio context. The Star Wars saga will always be taken care of under her leadership. She is truly one of the greatest producers in America as well as being a great friend.”

Kathleen Kennedy must be thrilled to have such a positive endorsement from such a negative influence on Star Wars. We are being quite mean this morning, aren’t we? We’re sorry. The over-abundance of Star Wars news has got us all cranky.