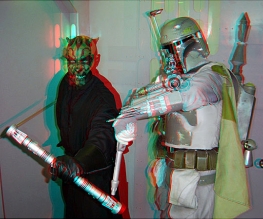 Back in the late 1990s, George Lucas presented his fans with a mouth watering prospect; the original Star Wars trilogy – back on the big screen! Yet that wasn’t quite true. Determined to create a whole new Star Wars experience, Lucas altered the films to best suit “his original vision”, thereby changing the universe we had known and loved. Even if he’s tried to fix it since, our trust was destroyed the moment that Greedo shot first.

With this new-old trilogy soon joined by a collection of patchy prequels (along with countless DVD re-edits), we hoped that Lucas may have finally exhausted the cash cow; but today he has done it again. Yes, in 2012 the Star Wars saga will return to our screens – this time in eye-assaulting 3D! Coming at a rate of one film per year, the releases will take place in storyline order, beginning with Episode I. Three dimensional Jar Jar? Meesa no likey!

Recent post-production 3D conversions have not been reknowned for their quality and it doesn’t come much more post-production than 33 years after the first film’s original release. And whilst we’re sure Lucas has both the money and staff to pull off something reasonable, when will George realise that he can leave the classics alone? With the re-releases creating opportunity for yet another DVD/Blu-Ray release on top of initial ticket sales, the epiphany probably won’t happen anytime soon.

Previous: Sound of Music cast to reunite on Oprah!
Next: Peepli [Live]