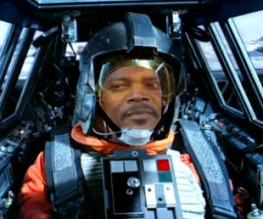 Star Wars VII seems to be interesting a great many people, not least all of us here at the BFF Space Station who have refused to let a single Star Wars news story slip past our turbolasers. Samuel L. Jackson is the latest of the Star Wars alumni to add his name to the “Interested In Returning” list, joining Mark Hamill, Carrie Fisher and Harrison Ford.

“I’m not surprised, but totally geeked by the idea of there being more Star Wars. It’s like, okay, Obi-Wan was dead when episode four started, so maybe everyone thinks I’m dead and we’ll find out what happened to Mace Windu. I can come back as one-armed or a one-handed Jedi that’s still around that didn’t actually die.”

Umm… Samuel L. Jackson as a one-armed Jedi who survived a thousand-foot drop out of a window? It’s… possible. Do you even want to go back to the Star Wars set, Mace?

“Hell yeah! I could do that or be a ghost hologram. I don’t care. I just want to stay associated with the franchise. Not that I won’t because I’ve been in three of them.”

When he says “ghost hologram”, he’s referring to the sparkly-glowy Force Ghost like Obi-Wan and Yoda (and Hayden Christensen) became.

To totally geek out though, there is a suggestion in Star Wars Episode III: Revenge of the Sith that Qui-Gon Jinn had to actively develop a method to convert your Midichlorians into a Force Ghost before you died, and Mace Windu clocked it rather suddenly. He probably had time to meditate as he plummeted to his death on Coruscant, but that would just be silly. Quite honestly we would prefer that all of the Bantha Poodoo of the Star Wars prequels could be removed from our brains. Surgically if needs be.

Either way, don’t expect Samuel L. Jackson to crawl back into Star Wars unless Disney have lost their “mother fucking” minds. Perhaps they could find a cameo role for him – stick him inside a robot or something. Gotta keep Sam happy, guys.

Could we see a return of Mace Windu in Star Wars VII? Have you had it with these motherfucking Jawas on this motherfucking X-Wing?

Previous: The Man With The Iron Fists
Next: Angelina Jolie pushes for new writer on Salt sequel