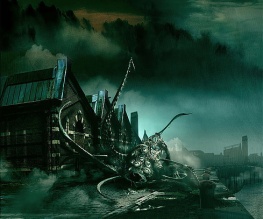 Guillermo del Toro is at war with Universal Pictures over the proposed star of his next film.

At The Mountains Of Madness, based on the Gothic mythos of H.P. Lovecraft, has long been on del Toro’s wishlist, and now it is finally on the cards – in 3D with production by James Cameron, no less – he understandably wants to realise his vision as closely as possible. Unfortunately for us, that involves using Tom Cruise.

However, backers Universal Pictures are keen to see James McAvoy cast in the lead role of William Dyer, a geologist who discovers ancient extraterrestrials in Antarctica. Filming isn’t due to start til May next year, by which time McAvoy will have taken over from Patrick Stewart in X-Men: First Class and Cruise should have wrapped Mission: Impossible 4 (heaven help us), so there’s plenty of time for negotiation and fiddling about. Best For Film knows who it would prefer – McAvoy has much more of a capacity to channel the Dyer’s necessary geekiness, whereas Cruise won’t be satisfied unless he gets to run a lot whilst looking intense. As usual.

Previous: Top 10 British films of the last ten years
Next: Going The Distance