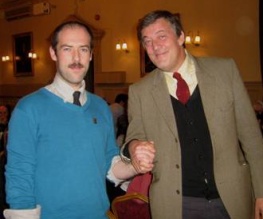 Best For Film is sobbing all over its morning packet of Minstrels at the news that Stephen Fry and his long term partner Daniel Cohen have apparently gone their separate ways.

The Daily Mail alleges that Fry has put the £2m West Hampstead house he shared with Cohen, his partner since 1995, on the market and is living in rented digs whilst seeing 20-something stage actor Steven Webb, lately of The History Boys. Best For Film acknowledges that the DM will print any old rubbish so long as it somehow defames anyone who isn’t white, straight and a political Neanderthal, but we’re still worried.

The article in question, which has at least avoided being garnished with the homophobic filth which oozes from Jan Moir’s pen, claims that the breakup is common knowledge amongst Fry’s circle. This would seem to be a rather foolish lie to tell if indeed the story is a mélange of half-truth and rumour…

BFF will keep you updated as and when any credible news outlets pick up on this story. In the meantime, we’ll be busy sending @stephenfry consoling tweets and inviting him round to the office for a coffee after work. Just a coffee, no funny business. Obviously.