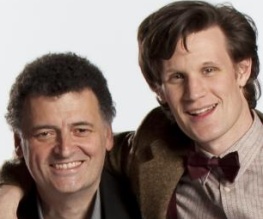 Doctor Who’s lead writer and executive producer Steven Moffat has taken to Twitter to reassure fans concerned that the Doctor’s planned trip to the big screen would be in the form of a turgid Hollywood reboot.

The much-awarded BBC kingpin, who is also jointly responsible for the frankly matchless Sherlock, told Twitter this morning that:

…and breathe. Whilst reassuring, this does rather take the edge off our brilliant blog about the actors who should take over as the Doctor; still, no harm in rereading it, is there? Glad you agree.

How much do you want Steve Kloves to not be involved? Write down exactly how much on a piece of paper, wrap it around some dog mess, light it and put it through his letterbox immediately.

Previous: BFF Advent Calendar – 1st of December
Next: Tom Cruise to star in most dreadfully titled film ever