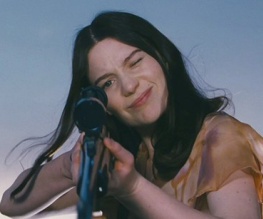 Stoker, the new horror film from Oldboy director Park Chan-wook, has released a 60 second trailer showing India (Mia Wasikowska) meeting her uncle Charlie (Matthew Goode) for the first time. The film premiered at Sundance last week to favourable reviews, with Guardian critic Jeremy Kay calling it “a gorgeously mounted family mystery dressed up as a gothic fairytale”. Take a look at the trailer below.

The plot of Stoker centres around India, who has recently lost her father and becomes infatuated with her uncle. Her mentally unstable mother (Nicole Kidman) tries to warn her about her mysterious uncle, but India is increasingly drawn to him. The story is said to be packed with literary and film references, from Bram Stoker’s Dracula, to Alfred Hitchcock’s Shadow of a Doubt.

In his first English-language film, Chan-wook aimed to attract new audiences to his films after gaining popularity for his ‘Vengence’ trilogy, saying “Whether it becomes a hit or not is not the most important thing for me. I want to attract more diverse audiences.” The script was written by Prison Break screenwriter Wentworth Miller and the film is co-produced by Ridley Scott.

Clint Mansell, who worked on Darron Aronofsky’s The Fountain, Black Swan and Requiem for a Dream, has composed the soundtrack to the film, which is reportedly “very haunting”. Stoker will be released in the UK on March 1.

What do you think of the Stoker trailer? Let us know below.